Thank you for sending your images. I will upload the best on to this page.
If you would like to send in any pictures, please send them in JPG format to keep the files sizes to my e-mail as small as possible.
Around 50K each is all that is needed for the web. ( This will save your time uploading too :-)
Please check the file size before sending. Thanks very much, Dave.

Tino Konrad from Germany made this model.

Adam & Carl from Sweden have made these working Lego Hypno-Disc's. 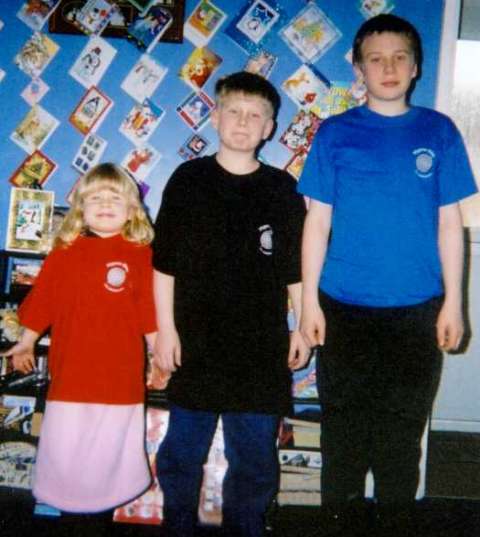 Frances from Melbourne in Australia used Photoshop to design this 'swish' logo.
( I have an auntie who lives in the same city. Useless infomation I know !)

Stephen from Oxford had this Hypno-Disc cake for his 4th birthday
with his robot wars arena. Cool !

Silas from Denmark has been busy on his computer 3D modelling program too!

Ben's rendered Hypno-Disc with transparency so you can see the inside too.

David generated this drawing on computer showing the changes made to Hypno-Disc
over the past 3 series.

Harry from Essex has built this Hypno-Disc and the radio controls too. Good work Harry !

Joe Watson has been busy creating this unbelievable HD. The construction of the disc is very accurate.
Joe will be 10 on December 19th. I think Robot Wars presents are likely !

Jamie Steel, Derek and Ken at a recent show. Can you see George from Chaos 2 in the picture ?

Jamie Sylvester from Scunthorpe worked hard on his computer to draw these Hypno's.
We thought the single spike on the back was a good idea to save weight.

Mark from the Netherlands made this Hypno from Lego
Nice SRM !.

Brett McBride had the enviable task of eating this cake on his 4th birthday.

Roseanna Keighley has designed and build these superb Hypno-Disc's with upgrades to the weapon, wheels and even a rear flipper on the HD at the left..

Hypno-Disc cake for Julian Bird on his 4th Birthday.

This fantastic cake was for Ross Codrai on his 12th Birthday.
I wonder what the 'damage' was after the party !
Could be the real thing . Shown in 'Real Robots' magazine.

Hypno-Disc in the arena by Matthew Rose.

Back to Home Page